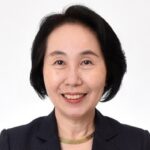 She joined the government as an economist in 1987. She has held various positions of economic research, forecasting and macroeconomic policy-making, including Director for Macroeconomic Policy Coordination with the Bank of Japan, and Director for Economic Policy Framework in charge of medium- and long-term fiscal consolidation issues. She also served as Vice Chair of the APEC Economic Committee and Vice Chair of the OECD Economic Policy Committee. When she was Director-General for Economic and Fiscal Affairs, she supported Prime Minister Abe at the G7/G20 Summit meetings as the chief representative of the Cabinet Office.

In the academic field, she has taught the Japanese economy at the Graduate School on Public Policy of the University of Tokyo since 2010. Her major publications include Macroeconomic Policy Frameworks (2003), Inflation Target and Monetary Policy (2006) (with Takatoshi Ito), and Global Financial and Economic Crisis (2010) (with Kazuo Ueda et al). She is a board member of the Japan Association of Business Cycle Studies and a member of the Japanese Economic Association.

She holds MSc in Economics from the London School of Economics and Political Science and graduated from the University of Tokyo.