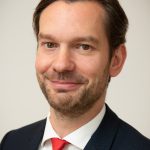 Head of International Relations of the City of Dortmund since 2019. _x000D_
Before (2017 – 2019) Martin worked in the mayor’s office of the City of Dortmund._x000D_
From 2010 – 2016 he was employed at Emschergenossenschaft (Watermanagement Company) as the assistant to the CEO. After finishing his studies in 2008 (MA), Martin began his career as a PR consultant and worked for the German Bundestag (national parliament). He wrote his bachelor’s thesis about music ethnology in China. The master’s thesis was about mega issues like climate change and their impacts on media companies._x000D_
_x000D_
I would like to put the dimension of cities more into the global context (keyword Urban Diplomacy). It would be nice if we could integrate it even better in G7 and G20.