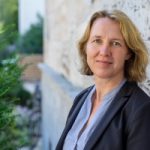 Claudia Schmucker is head of DGAP’s Geo-Economics Program. Prior to that, she had headed DGAP’s Globalization and World Economy Program since 2002. She has published extensively on European and transatlantic trade policy, the World Trade Organization (WTO), as well as on the role of informal forums such as the G7 and G20. She is member of the Steering Committee of the G20 Trade and Inv estment Research Network (G20 TIRN).