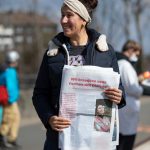 She is a peace worker from Ankara, Turkey. She began her career in journalism and in 2013 she covered the Gezi Park Movement as a freelance journalist in alternative media and international press. She was a Master-student in Peace and Conflict Studies Hacettepe University’s Istanbul branch from 2014 to 2017, where She was taught among others by Johan Galtung, Jorgen Johansen, Stellan Vinthagen, Oliver Richmond, Norman Finkelstein, Joshua Weiss, Wolfgang Dietrich, Gal Harmat, Kai Frithjof Brand-Jacobsen, Zeki Ergas, Tatsushi Arai and Amr Khairy Abdalla. Hacettepe University shut down the department in 2015 but she obtained a Master’s degree with my thesis subject being ‘Identity-based Conflicts in between Resistance Groups during the Gezi Movement’.Since graduating from Hacettepe University in 2017, she was able to gain experience, inspire transformers and realize projects. As a trained peace-worker, she has been invited to present new ideas at international conferences and did interventions on the level of established organizations as well as in inter-personal or inter-group conflicts.In her academic and practical approaches, she works for the creation of new social structures and implementation of state-of-the-art scientific solutions.She founded the concept of nature-based micro-level peacebuilding methods in Wuppertal which can be integrated into the real environment.She cares deeply about a shared understanding of mutual respect. Above all, it is also important to her to take responsibility for future generations.

Burcu’s “Urban Gardening Peace Project” won second place in the Audience Award at Go Volunteer Awards 2021, and third place at “Social Innovation” category. She was selected as a young scientist of the Right Livelihood Campus Bonn in 2021. She is an UrbanA Fellow https://urban-arena.eu/ and Tag des Guten Lebens Advisory Board member in Wuppertal. https://www.guteslebenwuppertal.de/